What Wood Means to Us – A Sustainable Future

From the earliest history of man wood has been faithfully by our side. It’s first usage was being a fire to warm our family as well as for light to protect them against the night fears of predators. Man is the only animal who has learned how to utilize the effects of a flame or fire for their own support.

First man used nature's ability to make fire from friction, flints, the sun & other natural fires. Once they understood the benefits of fire, they quickly learnt how to manage it; firstly, they found that by carrying and nurturing an ember, they could move from the natural source to reestablish it many miles away so they had fire with the use of wood farther and farther from the original site. This was soon followed again by man using wood to create fire. By understanding the basics of friction, they gained the ability to twist a stick within the crevice of another surrounded by wood, dried leaves etc. so the friction would generate heat and thus create sparks in the pile and hence grow fire themselves. So, firelighters of this form became one of the earliest tools of man, just behind a wooden branch being used as a club.

Thousands of years later we are still using wood for the same purposes predominantly heating, cooking and light, but just in a more efficient way. Wood Pellets are an easy, clean and safe way of utilizing the wood without the need to store large logs. They utilize the same amount of wood but in much smaller spaces and still use fire without having to break down the bedrock of the earth to gain access to fossil fuels: This aspect of damaging the ground on which we live along with the fact that we are burning through these fossil fuels at such a high rate without them regenerating (what we are using at present took 150 – 300 million years to be established), the likelihood is they will be eradicated by the middle of this century or in other words before children born today reach middle age, with the exception of coal that may last a further decade or two.

This shows why man is working so hard to find other forms of energy to work with and apart from natural form of movement energy that is generated (wind and wave technology) wood will soon, as it was when man first came onto the earth, become a major source of supporting mankind.

As the Committee for Climate Change have recently released their report calling for zero net emissions by 2050 this is a particularly relevant time to be looking back on our past, and using those sustainable fuels to power our future.

We are here to make sure the “Pure” name stands for quality, reliability and efficiency to support future generations. 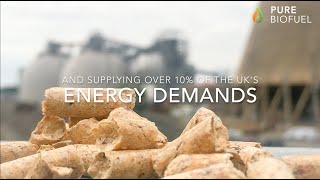